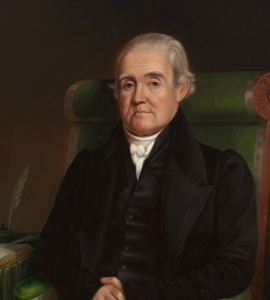 While Noah Webster, just a few years after producing his famous Dictionary of the English Language, would produce his own modern translation of the English Bible in 1833; the public remained too loyal to the King James Version for Webster’s version to have much impact.

Noah Webster was an American lexicographer, journalist, textbook author, and spelling reformer. He was born at West Hartford, Connecticut, on the 16th of October 1758. He was descended from John Webster of Hartford, (who was Governor of Connecticut in 1656-1657), and on his mother’s side from Governor William Bradford of Plymouth.

The Early Years of Noah Webster

Noah Webster entered Yale University in 1774, graduating in 1778. He studied law, and was admitted to the bar at Hartford in 1781. In 1782-1783 he taught in a classical school at Goshen, New York, and became convinced of the need of better textbooks of English. In 1783-1785 he published at Hartford A Grammatical Institute of the English Language, in three parts, a spelling-book, a grammar and a reader. This was the pioneer American work in its field, and it soon found a place in most of the schools of the United States. During the twenty years in which Webster was preparing his dictionary, his income from the spelling-book, though the royalty was less than a cent a copy, was enough to support his family; and before 1861 the sale reached more than a million copies a year. The wide use of this book contributed greatly to uniformity of pronunciation in the United States, and, with his dictionary, secured the general adoption in the United States of a simpler system of spelling than that current in England.

In 1788 Noah Webster started in New York the American Magazine, but it failed at the end of a year, and he resumed the practice of law at Hartford. In 1793, to support Washington’s administration, he removed to New York and established a daily paper, the Minerva. Later, he started a semi-weekly paper, the Herald (later called the New York Spectator). In 1798 he moved to New Haven. Noah Webster also served in the Connecticut House of Representatives in 1800 and 1802-07, and as a county judge in 1807.

Noah Webster published his first dictionary of the English language in 1806, and in 1828 published the first edition of his An American Dictionary of the English Language. The work came out in 1828 in two volumes. It contained 12,000 words and from 30,000 to 40,000 definitions that had not appeared in any earlier dictionary. In 1840 the second edition, corrected and enlarged, came out, in two volumes. He completed the revision of an appendix a few days before his death, which occurred in New Haven on the 28th of May 1843.

Webster changed the spelling of many words in his dictionaries in an attempt to make them more phonetic. Many of the differences between American English and other English variants evident today originated this way. The modern convention of having only one acceptable and correct spelling for a word is due mostly to the efforts of Webster, in standardizing spelling. Prior to this, the popular sentiment toward spelling might have best been summed up by Benjamin Franklin who said that he “had no use for a man with but one spelling for a word.”

Webster’s dictionary was so popular that “Webster’s” became synonymous with dictionary to many Americans. As a result, the Webster’s name lost trademark protection and is now used by numerous publishers in the titles of their dictionaries. Among these, the Merriam-Webster’s dictionary is considered to be the most direct descendent of Noah Webster’s lexicographical tradition, the Merriam brothers having purchased the rights to revise the dictionary from Webster’s heirs upon his death.

While Webster’s association with the dictionary is common knowledge, it is not so widely known that Noah Webster produced his own modern English translation of the Bible in 1833.

Though an excellent and highly accurate translation, Webster’s Bible was not widely accepted, due to the continued popularity of the ancient King James version. It was, however, the most significant English language translation of the scriptures to be done since the King James version of more than 200 years earlier. The “Webster Version” of the Bible has actually enjoyed a recent increase in popularity in electronic and “online” formats (such as is available at WWW.BIBLES.NET and other Biblical resource websites) because it is one of few modern English translations of the scriptures which may be freely used without paying any royalty, as its age makes it public domain material.